Committee to Ban Fracking in Michigan

Our quest to ban fracking and frack wastes statewide in Michigan has been, and still is, a long journey. Signature-gathering has concluded and we enter the legal phase! We are now in the Michigan Court of Appeals. Oral argument is scheduled for March 3, 2020. 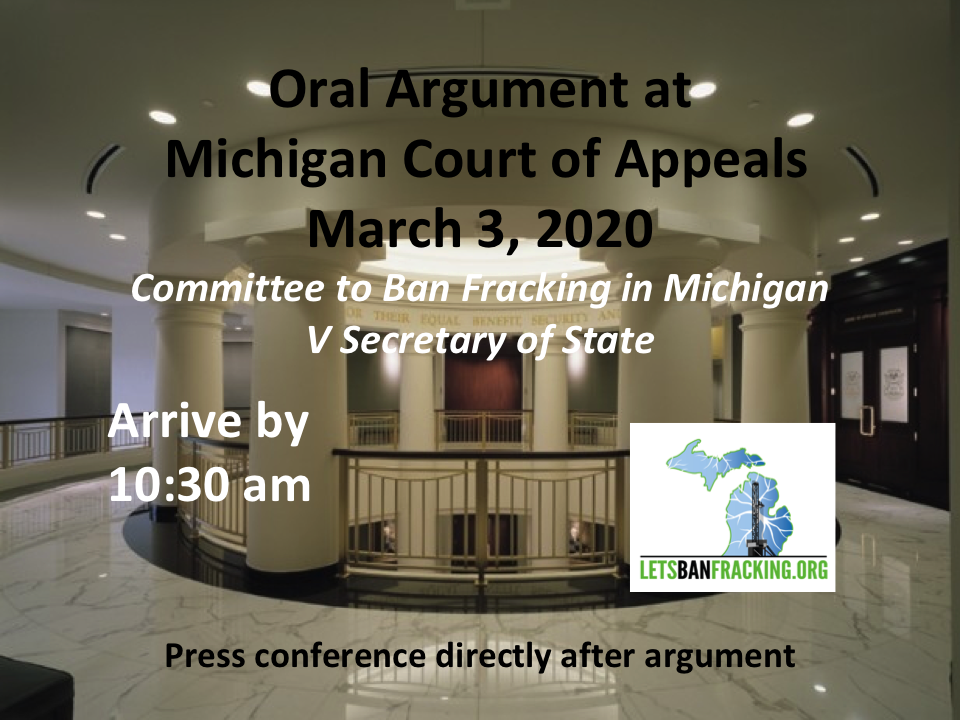 We concluded our signature-gathering phase and tendered 270,962 signatures* on Monday, November 5, 2018. A truly amazing feat accomplished by hundreds of volunteers over a 3-year period.

On that day we brought our 47 boxes to the State of Michigan Bureau of Elections for filing for the 2020 election. To our astonishment, the Director of Elections rejected the filing without even taking possession of the boxes. This action brings us to the next phase in the campaign: litigation.

The very next day, we sued the Director of Elections and Secretary of State on Tuesday, Election Day in the Michigan Court of Appeals, asking the court for immediate same-day consideration, but the court took no action. We put the boxes of signatures into secure storage with a records management company, and amended the complaint asking the court to compel the Bureau to take possession of the signatures as they should have on November 5, consider that action a "filing," and begin canvassing, which by law only the Board of State Canvassers can do. This suit was thrown out without explanation by the court.

We sued again, this time in the Court of Claims, in late December 2018. That case is now being appealed to the Michigan Court of Appeals. The lower court decided against us, saying that even though it was not by law required that we put any election date on the front of the petition, because we did, it matters. We say no, only the Constitution defines which election--if one is held at all, because the Legislature also is required to have a 40-day period in which to consider enacting or not enacting our proposal--and that is "the next general election" following the mandatory 40-day legislative period. What we say on the front is immaterial to this Constitutional directive, and that our mis-statement doesn't supersede what the constitution says. We also cite there is no legal difference between "tendering" and "filing" petitions, therefore we did file on November 5, 2018.

When we sued in 2016, the defendants had said in court, and the court agreed, that "if and when Plaintiffs [the Committee to Ban Fracking] obtain additional signatures they require, then they would be able to file their petition." Now they are saying just the opposite, we cannot file. We make the argument in one of our counts, that the State cannot go back on what it successfully argued in the court previously.

See our LAWSUIT MENU for all the filings and decisions.

More background: We started this petition in 2015 originally to get on the 2016 ballot. By the end of what we thought was a hard-and-fast 6-month collecting period, we learned that that was not the case: that signatures older than 180 days could in fact be used if proven valid. We continued collecting to June 1, 2016 but at that time, we still did not have enough signatures to submit.  We sued the state that day challenging the unconstitutionality of the statute (MCL 168.472a) that limits signature collecting to 180 days. The State and the courts said our case was "not ripe," that is, we sued too soon, and that we must first collect all the signatures, have them turned down by the State, and then sue. In 2016 the Legislature changed the law, and the governor signed it, making the signature-gathering law even more restrictive to only 180 days, and even more unconstitutional. Part of our case is challenging this new version of the law. All legal precedent is on our side. Please see our legal filings on the Lawsuit menu.

* Over 290,000 signatures were collected, and after rigorously reviewing, verifying and removing duplicates and other unusable signatures, we ended up with approximately 270,962 for filing.

Help us get all the way on the ballot.

We are a people-powered grassroots campaign. Join us! We will build on the momentum of the signature gathering phase with educational events, fundraising, and eventually canvassing and get out the vote.

We welcome and need your financial support. It's through the support of individuals, businesses and organizations that we will make it on the ballot and win. At this time we need funds to verify signatures, the last payments to paid circulators, and some court costs. As we continue we'll fund educational forums, campaign literature, and Get-Out-The-Vote campaigning. Thank you for pitching in! Go to our DONATE page here.